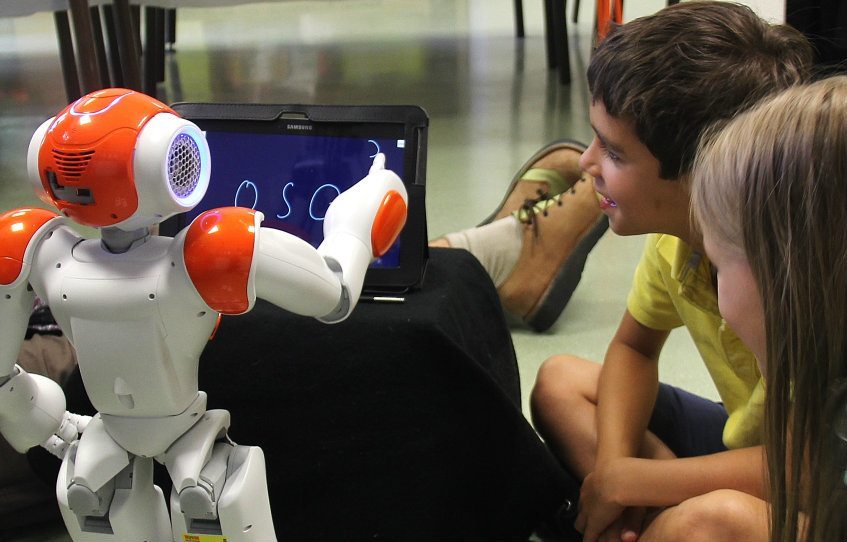 Researchers are exploring how an artificially-intelligent robot can help children improve their handwriting skills, by placing the youngsters in the role of teacher.

) and is based on the ‘protégé effect’ – the principle that teaching others helps us learn more effectively.

Students first spell out a word using magnetic letters, which the robot then writes on a tablet device (deliberately including some deformities). The child helps the robot by using a stylus to make corrections, writing out the whole word or particular letters.

The robot ‘learns’ from its young teacher and writes a new version based on the corrections. The process continues until the child is satisfied, at which point the duo moves on to a new word.

‘[This style of learning] has been shown to help children catch back up to the rest of the class in other areas, like reading, for example.

‘There’s a thought that a lot of learning by teaching is mental, it’s not necessarily about the physical … but just evaluating someone else’s thinking:  Was that correct? Who’s in the right here? What do I have to change about the way that I’m explaining things or the way that I understand things so that we match?’

Hood worked on the CHILI Lab (Computer-Human Interaction in Learning and Instruction) CoWriter project for her Master’s thesis under the supervision of scientist Séverin Lemaignan. ‘Pretty much all that you see, except for the robot itself, I had to program,’ she tells Teacher.

‘Because this robot is cheap enough that schools can afford it [around AUD$8000], it doesn’t actually have the physical capabilities to write with a pen. So, it will mimic writing a word that is artificially bad, then the child will draw on the tablet with a stylus and the robot will adapt to their corrections.’

She adds that by taking the role of teacher, the child becomes invested in the progress of the robot – leading to increased motivation and engagement. This relationship also allows students who need intervention to practice their handwriting skills in a way that boosts their self-esteem.

The system has already undergone initial field tests in a school setting with students aged six to eight. ‘We wanted to get this in the hands of children as quickly as we could so that we could redirect the project if necessary. So, that was probably after four or five months of development.’

Hood says the technology is still in the prototype stage and future steps would include conducting long-term trials. Still, the results from the initial field tests are promising.

‘We got what we wanted from that, which was that the children could actually ‘teach’ the robot, and that it was improving and whatnot. Also, I think what’s interesting about this project is how we have leveraged the combination of the robot and the tablet together to actually make it so that you can use a cheap robot in this [kind of educational setting].’